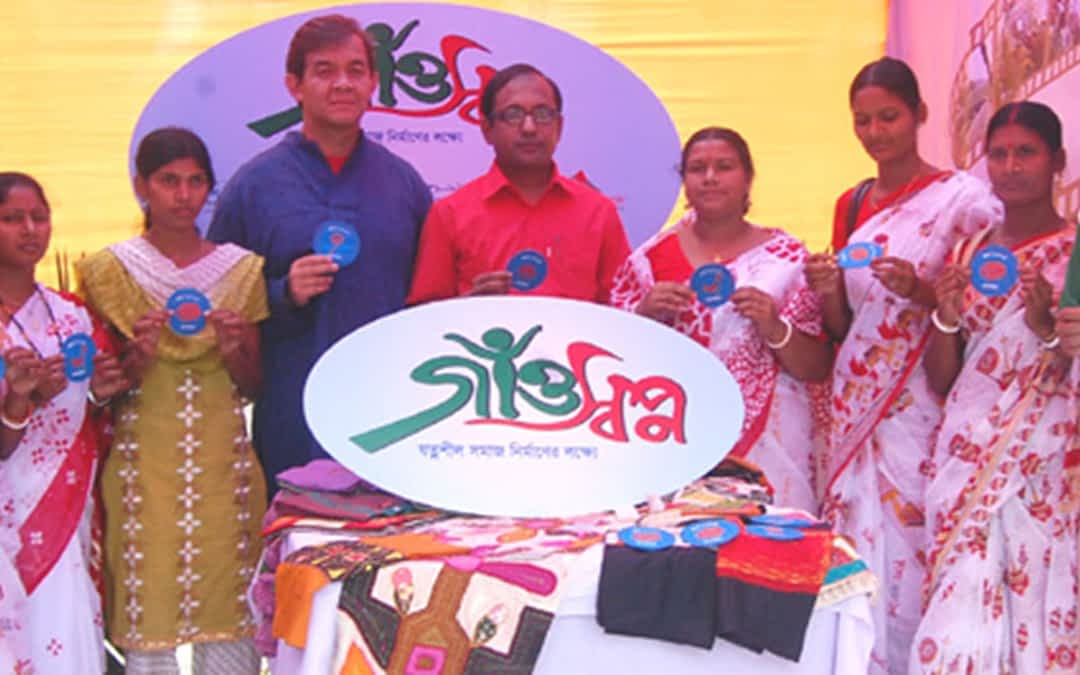 Under the project Mainstreaming CSR to Address Poverty

Dream appears not only in sleep.

It does appear in conscious state of mind.

Dream appears in the journey, in the thoughts, in the eyes…

But such dream needs to be created – for people who would chase it.

This is a story of the dream makers and the dream chasers.

Seed of the dream was sown in the salty soil of a remote village in the Sundarbans, the largest mangrove forest of the world. A bit more than two thousand people of the village Bon Laudob were in an extremely hazardous condition in terms of availability of water for domestic use. Women had been the worst sufferers who had to spend several hours of the day for collecting a pitcher of water from a far off pond, which again was not sufficiently safe for human health and body.

Another hazardous work of these women was collecting firewood form the deep forest for cooking, which consumed time and involved the risk of injury, even death.

The scenario came up when MRDI’s team conducted a social investigation in the village as a part of its CSR advocacy programme. The problem was initially identified by the media monitoring team of MRDI.

Both the problems were addressed at the CSR initiative of two corporate houses – Bank Alfalah Limited providing funds for re-excavation of four ponds with installation of filtering device and Midas Financing Limited which provided eco-friendly oven for each family of the village that consume less fuel and emit less carbon.

This small initiative had a BIG effect on the women of the village. Their pale faces turned into smiling ones and the blank eyes glittered in dreams for a better life. Fetching safe water from nearby ponds and collecting small amount of firewood from neighbouring bushes have made their life easier. Rina, Shormila, Nomita, Tulsi, Kabita and hundreds of other women have now plenty of leisure time

But should they waste this time only in idle gossips? Can’t they make better use of it for a productive cause? These questions came up when MRDI and its implementing partner Green World Communication talked to the women of the village and male members of their families in a courtyard meeting.

At one point of discussions, the idea of developing skills of women in tailoring and stitching, and using the skill in generating income emerged as a potential one. Now selected women of two villages are receiving training, and some of them have already started producing embroidered gift items.

The initiative took the shape of a dream when the question of marketing the products came up. It was decided that an independent marketing outlet will be launched with the entire ownership of women of these villages. Without much delay, the outlet was launched at Dhaka on the eve of the Bangla new year with its brand name – Gaon Swapna – which means dream of the village. Knowing well that establishing a new brand in a competitive market would not be an easy task, the organizers are committed to fulfill the dream with proactive participation of the revitalized women.

MRDI team identified another group of marginalized women in Basatpur, a village in the border district of Jessore. These women cross the border as irregular migrants in search of job in the neighboring country and become victims of harassment. MRDI has established a women’s centre in the village with financial assistance of The City Bank Limited and in collaboration with Banchte Shekha, a local NGO of Jessore and Gramer Kagoj, a local daily newspaper of the town. Women of the village have started receiving skills training. They are also going to be a part of Gaon Swpana.

All these have been possible due to the technical assistance provided by Manusher Jonno Foundation (MJF) to MRDI in its effort to mainstream CSR to address poverty. MJF provided support to launching the advocacy campaign to popularize CSR as an alternative source of development funds.

Gaon Swapna is still a young plant which needs proper nourishing to mature. The venture — carrying the dreams of numerous marginalized women, will grow as a deep rooted tree with a healthy trunk, spreading its branches, producing leaves, flowers and fruits.