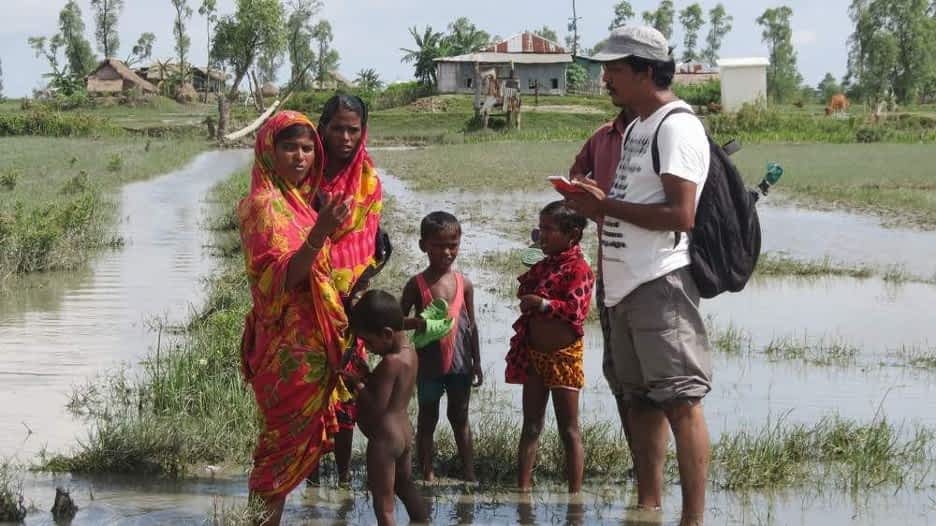 For the past year, award-winning Bangladeshi journalist Rafiqul Islam Montu, who specialises in covering coastal communities, has been sharing his knowledge with the next generation of investigative journalists through a series of training programmes and mentoring.

Working with the country’s Management and Resources Development Initiative (MRDI) in partnership with the Fojo Media Institute, Montu has been coaching mid-career journalists in how to cover stories about those at risk in coastal areas as part of the Investigative Journalism Partnership project.

Montu, an international specialist in coastal journalism, has been reporting on the topic for more than 10 years. His journalism is published locally, regionally, nationally, and internationally.

In May 2020, the west coast of Bangladesh was hit by Cyclone Amphan, at a time of lockdown due to coronavirus. There was no public transport and newsgathering was difficult. Montu says that thanks to the Investigative Journalism Partnership, which covered the cost of an eight-day trip, he was able to compile enough information to file a series of five reports on the situation which led to the government taking action in the affected area.

Because communication in coastal areas is so difficult, with poor internet connectivity and a lack of newspapers, Montu has encouraged the production of handwritten newspapers to be shared throughout the smaller communities not reached by the media.

He says these newspapers cover the “inside news” of remote and at risk communities. One has been featured on one of Bangladesh’s most popular TV magazines programmes.

Montu, who was born in a small coastal community in Bangladesh, grew up determined that “the voices of these marginalised people would reach the decision makers” so that it would be “easier for the government to set policy on the coast”.

He says there are 19 areas identified as coastal districts of Bangladesh, which are home to about 50 million people. Of the 19 districts, 16 are classed as being “most at risk”.

Montu says he has visited “almost all the places on the coast of Bangladesh”.

He travels by boat, rickshaw, van, or foot. “I have to walk a long way to places where there is no transportation and have walked 25 kilometres in one day,” he says.

Long walks are not the only problem he faces. “Maybe I don’t get a good place to sleep, or I don’t have a desk to write on, or the internet system is very weak, or I don’t have electricity – I have to deal with a lot of situations like that”, he says.

Montu knows he can’t do this alone, so he is building a growing network of journalists, academics, students, and citizen journalists, offering them training and mentoring.

In 2016 Montu called for one day a year to be set aside as ‘Coastal Day’. Celebrated on November 12, the day in 1970 when Bangladesh was hit by the strongest cyclone. Coastal Day is now an annual event.

Montu says the Investigative Journalism Partnership project has changed the face of investigative journalism in Bangladesh with many journalists learning how to carry out detailed research to enrich their work.