Change in control and attitude essential for Bangladesh media’s survival 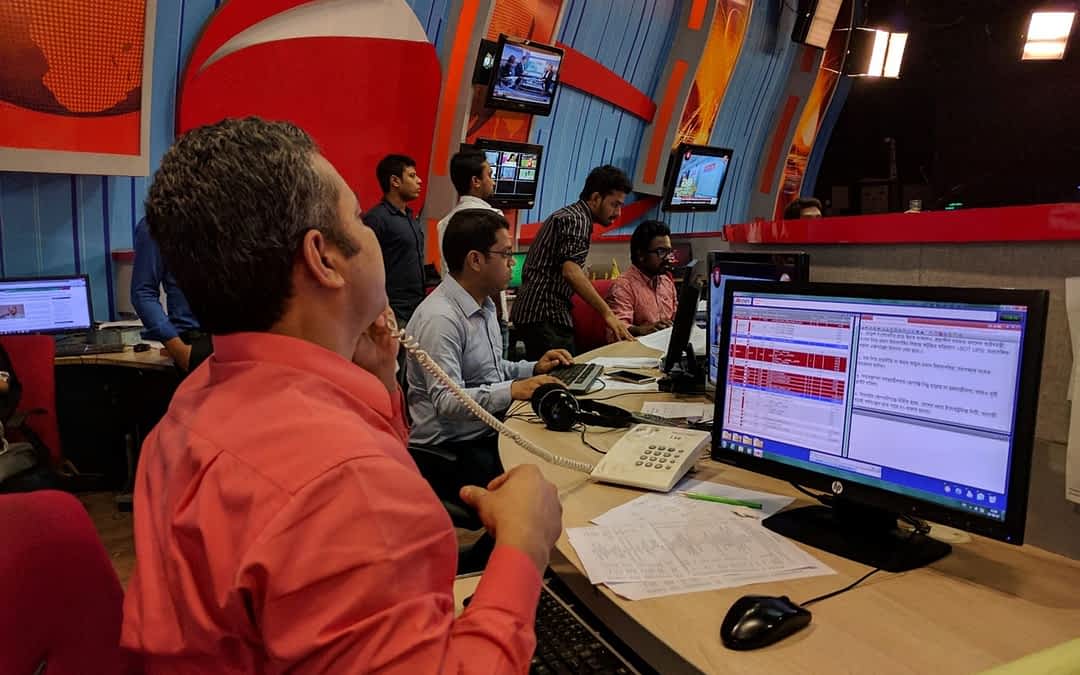 The Channel 24 newsroom as the nightly news programme goes to air.

A change in the relationship between government, corporations and the media is needed in Bangladesh if the country’s publishers and broadcasters are to stay in business and thrive.

That was a recurring theme during an online seminar on Thursday 21 January involving senior editors, academics and media experts following the publication of the study “Leadership or Stagnation: The Future of Media Viability in Bangladesh”.

The report looked at the economic challenges the Bangladeshi media faces as it emerges from the coronavirus pandemic and adjusts to a digital future. It also considered what a digital-first strategy might mean for the media in Bangladesh in terms of revenue and reach.

Written by Ross Settles, adjunct professor of Hong Kong University, and initiated by the Bangladeshi Management and Resources Development Initiative (MRDI) in partnership with Fojo Media Institute, Linnaeus University, Sweden, the report forms part of a project for “Improving Qualitative Journalism in Bangladesh:”

Introducing the session the report’s author said that the entire media ecosystem is fragile in Bangladesh in a climate where the audience is starting to lose their faith in the news.

In his report he’d stated that the media in Bangladesh had “played a strong role in every major political and social transformation in the country”, but that the “media environment had changed dramatically in the past two decades”, and, as a result, the media was struggling to “transform itself to the changes brought about by digital transition”.

He said one survey revealed that one in five didn’t want news, didn’t consume news, thought it a waste of time, had little value, and they didn’t believe it or trust it. Since 2015 the approval rating of the media had fallen dramatically by 26%, he said.

Syed Gousul Alam Shaon, managing partner and country head of the advertising agency Grey Bangladesh, said the country’s media as a business had been sidelined as a political tool, a move which he said is “killing media houses”.

“If you are independent running it like a business they have their business plan etc. Media houses are not doing that because they are controlled by corporate houses”.

Monjurul Ahsan Bulbul, editor in chief of TV Today spoke of a lack of trust in the media. He said traditional media has not yet been confronted with fake news which is mainly spread by online media and social media. But he said a lack of investigative reporting by media houses contributes to a lack of trust.

Faruq Faisel, regional director for Bangladesh and South Asia of the human rights organisation Article 19 said politics and political culture was relevant to the viability of the media industry. He said journalists were being obstructed from telling the truth and being innovative which in turn led to self-censoring.

The editor of the Dhaka Tribune, Zafar Sobhan, said the media in Bangladesh was “flying blind” in terms of assessing the audience because of the lack of credible data available. And he called on all sides, government, media and advertisers, to work together in order to establish a way of “understanding the actual situation” as regards the media market. “If you don’t know the numbers it’s hard to come up with a viable solution”, he said. He also spoke of the “corrosive impact of limitations” of what newspapers are allowed to do.

Shahidul Haque, chairman of the department of communication and journalism at the University of Chittagong, said the way to engage the community and increase media literacy is to highlight the issues of democracy, freedom of expression, and freedom of the press because they are co-related. Regarding advertising he said mainstream media is losing money because of Google, Facebook, YouTube.

Sayed Ashfaqual Haque, the executive editor of The Daily Star said there is no “silver bullet” for media sustainability and that reform is required if the media is to survive. “The government invested heavily in technology to develop its muscle to run propaganda and spread fake news and disinformation across social media. Free media is no match. It requires a lot of investment. We are living in the age of misinformation. Our colleagues are in no position to verify  facts, and prove what’s true and what is false.”

The broadcast gallery at Channel 24 in Dhaka.

Talat Mamun, executive director of Channel 24 said Bangladesh media is suffering from mistrust and misunderstanding. He said there needs to be a strong initiative from the government, the media owners and the leaders of the journalists associations to work on a “futuristic plan including rules and regulations” that all understand. “Without having anything we are in a bizarre situation, we don’t know the highway, where we want to go and where we want to stop”, he said.

Shakhawat Liton, executive editor of The Business Standard said it was important that institutions work properly to ensure the media’s protection and freedom of speech. “The viability of media will depend on economic development, but how far the development would lead to vibrant media will depend on the overall democratic environment”, he said.

The Prothom Alo newsroom in Dhaka.

Mathir Rahman the editor of Prothom Alo said that his newspaper would always be independent and neutral, and that they will run their own business and would not take money from corporates or the government.

He said the role of the government was important and that at one point it had  stopped 48 big companies advertising on Prothom Alo. He said the government had “a lot of tools for making things difficult for the newspapers”.

The country is divided politically, the media is divided, the journalists are divided. We all are responsible.

He said digital is the future and that his newspaper had moved to a digital-first strategy by converging the newsroom to operate 24 hours a day producing journalism in print, online and social media.

In August 2017 Prothom Alo, Channel 24, and The Daily Star all took part in two weeks of training in preparing a digital-first strategy and newsroom convergence organised by MRDI and Fojo in order to help prepare them and other media houses for the digital changes ahead.

The report the seminar was discussing had concluded that the Bangladesh news media faced two scenarios, stagnation and leadership.

“Bangladesh has a long history of cultural leadership, including in journalism. To continue and solidify this role, the current industry scenario will need reform and innovation. The alternative is a slow atrophy and stagnation,” he wrote.